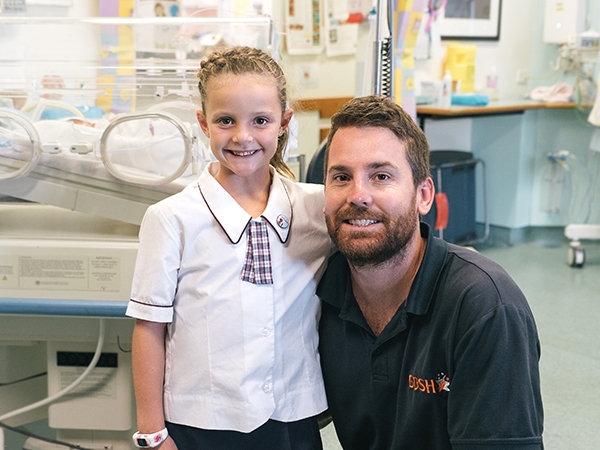 Charli in the NICU pictured with Spencer's father.

But when Charli Mitchell, a year 1 student at St Andrew’s Catholic Primary School in Malabar came into the Newborn Intensive Care Unit (NICU) at The Royal Hospital for Women, Randwick, and saw her tiny cousin, she changed her mind. Spencer weighed just 900 grams and was almost hidden under the tubes and equipment he was attached to in the acute care section of the NICU.

Charli was unable to hold her premature cousin as he fought for his life, so she decided to raise money for the NICU instead. She painted a shoe box, decorated it with purple love heart stickers, and asked guests at her birthday party to make a donation to the hospital, rather than buy her a present. “I just wanted to do something to help Spencer get better,” Charli says. “I was hoping to raise about fifty dollars and I couldn’t believe it, but by the end of my party, I’d collected a grand total of one thousand and seventy five dollars and fifty cents.”

Spencer was born on 11 March via emergency caesarean section, about three months early. Spencer has since been steadily gaining weight, thanks to the world-class care the NICU is renowned for, and his parents are looking forward to bringing him home to
Botany in a few months’ time.

Click here to take a look at our fundraisers or start a fundraising page of your own.