A Royal History; 150 Years at The Royal Hospital for Women

Every day at The Royal Hospital for Women, the unwavering dedication of the doctors, midwives, nurses and others touch the lives of thousands of women, children and families. For over 150 years, The Royal has been at the forefront of women’s health; providing vital and ongoing support and care to women, babies and families from all walks of life. It is not only the ethos of working in partnership with women that makes the care offered at The Royal so remarkable, but also the outstanding achievements and medical breakthroughs that have taken place at The Royal over the past 150 years.

The Royal’s legacy of being a centre of excellence began in 1821 when Australia’s oldest charity, the Benevolent Society, opened an asylum offering respite to the underprivileged. The Asylum, originally intended as a place of shelter, quickly began offering much needed medical care to those with nowhere else to turn. Over the next few decades young pregnant women, many of whom were destitute, sought help at the Asylum, and in 1866, due to the overwhelming demand, and under the direction of Dr. Arthur Renwick, a lying-in wing was established exclusively for maternity care[1]. Dr. Renwick, who had studied at the University of Sydney (graduating in 1857 with a Bachelor of Arts along with ten others in the second year the university granted degrees[2]) and abroad in Edinburgh, realised the need to separate these women from sick children at the Asylum, many of whom had contagious illnesses. Renwick was at the forefront of many public health schemes in New South Wales that transformed the care of childbirth, maternal and child health in the 19th century.[3]

Then located in Pitt Street, the Benevolent Asylum became known in the community as the ‘Lying-In Hospital of New South Wales’ and was to become the leading maternity facility in New South Wales.[4] For the first time, poor and disenfranchised women, most of whom were unwed migrants, were given access to medical care. As many as 60% of the women seeking help at The Royal in 1866 were young European migrants with limited support networks who were shunned in society for being unwed and pregnant.[5] Despite the community heavily criticizing the Benevolent Society for offering refuge and medical assistance to such women, as it was understood to encourage and endorse illegitimacy and what was then considered, immoral behaviour, the hospital continued to offer care to any pregnant woman in need. It is this strength and pioneering spirit that marks the beginning of The Royal’s 150 year long commitment to providing specialised care for women and babies. 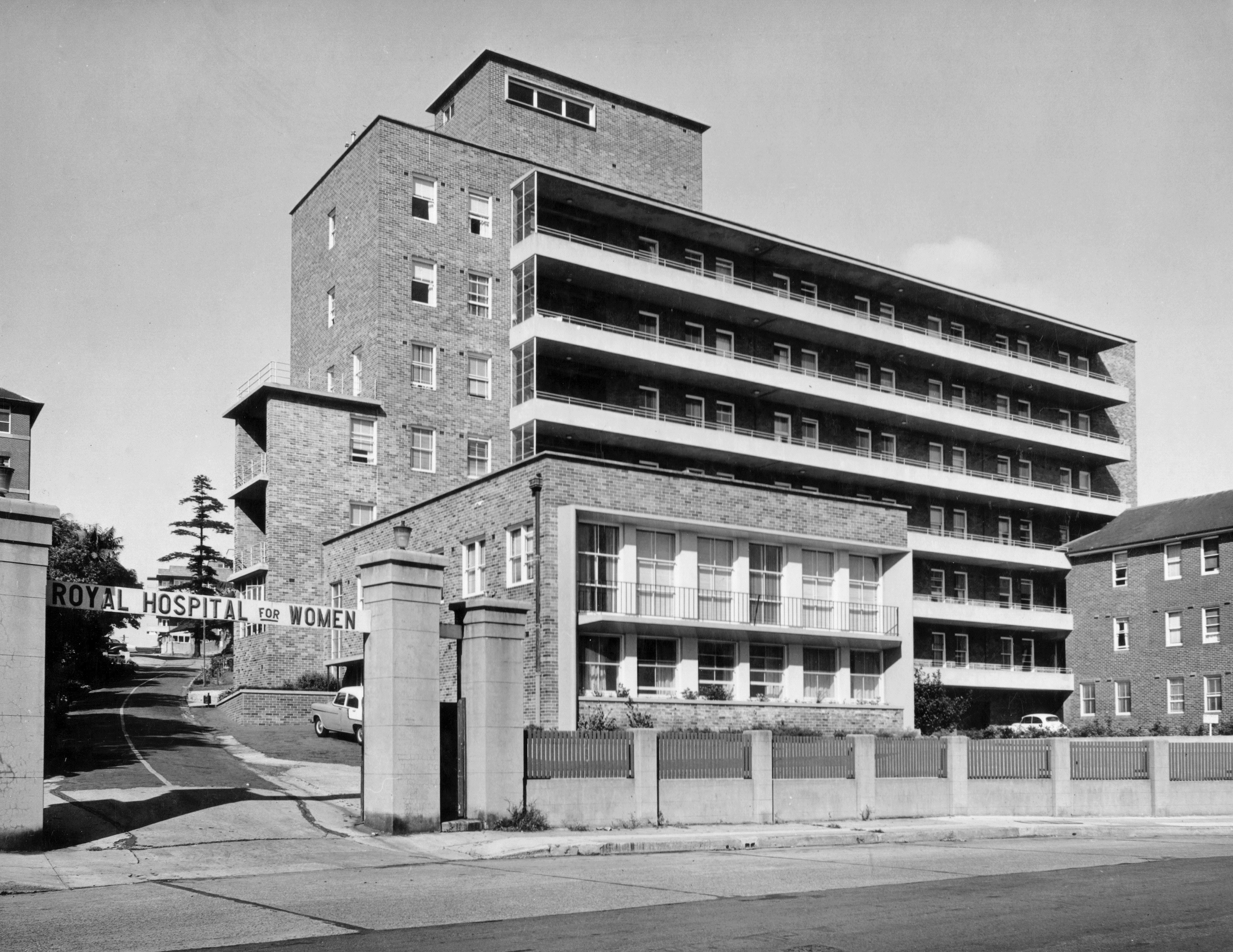 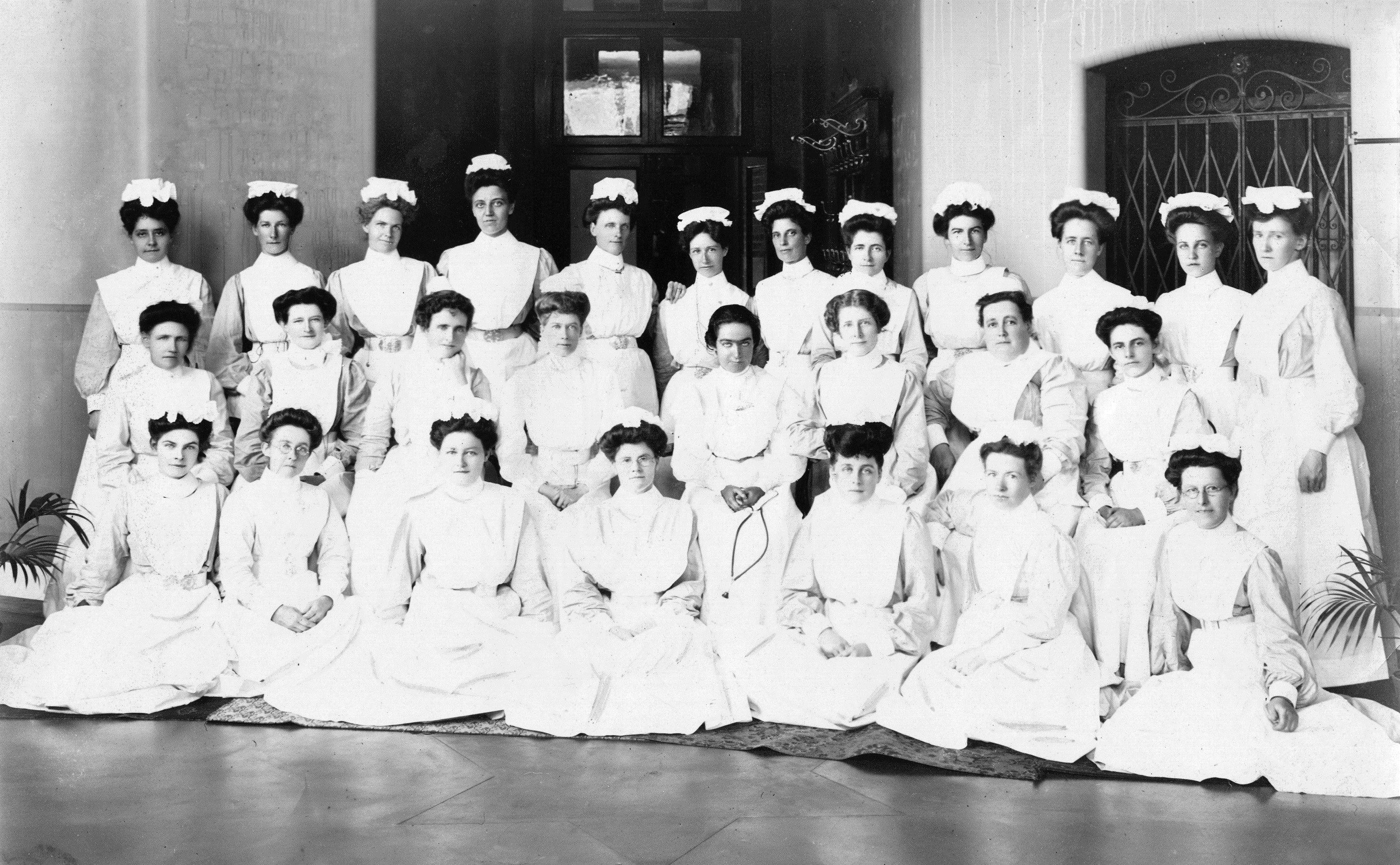 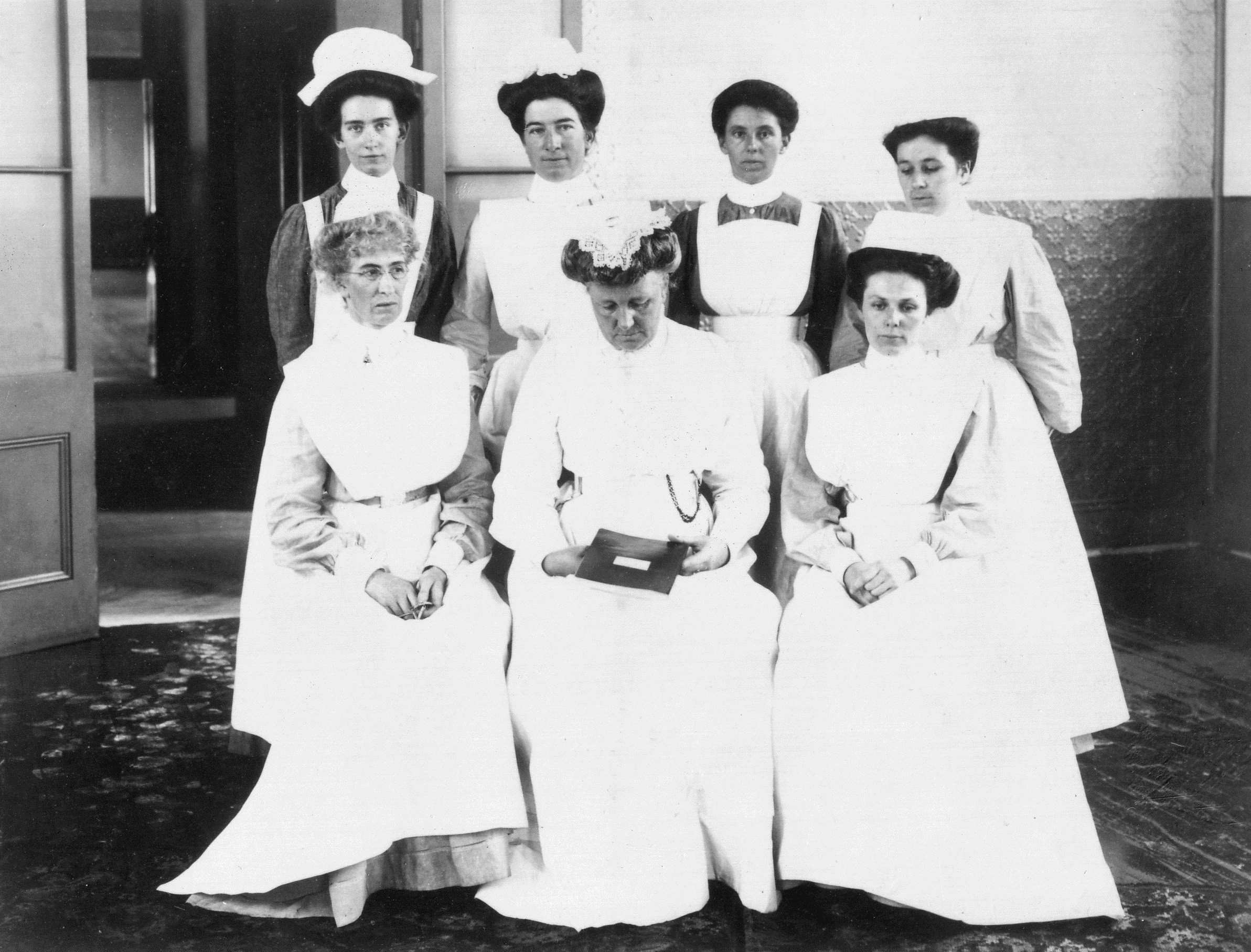 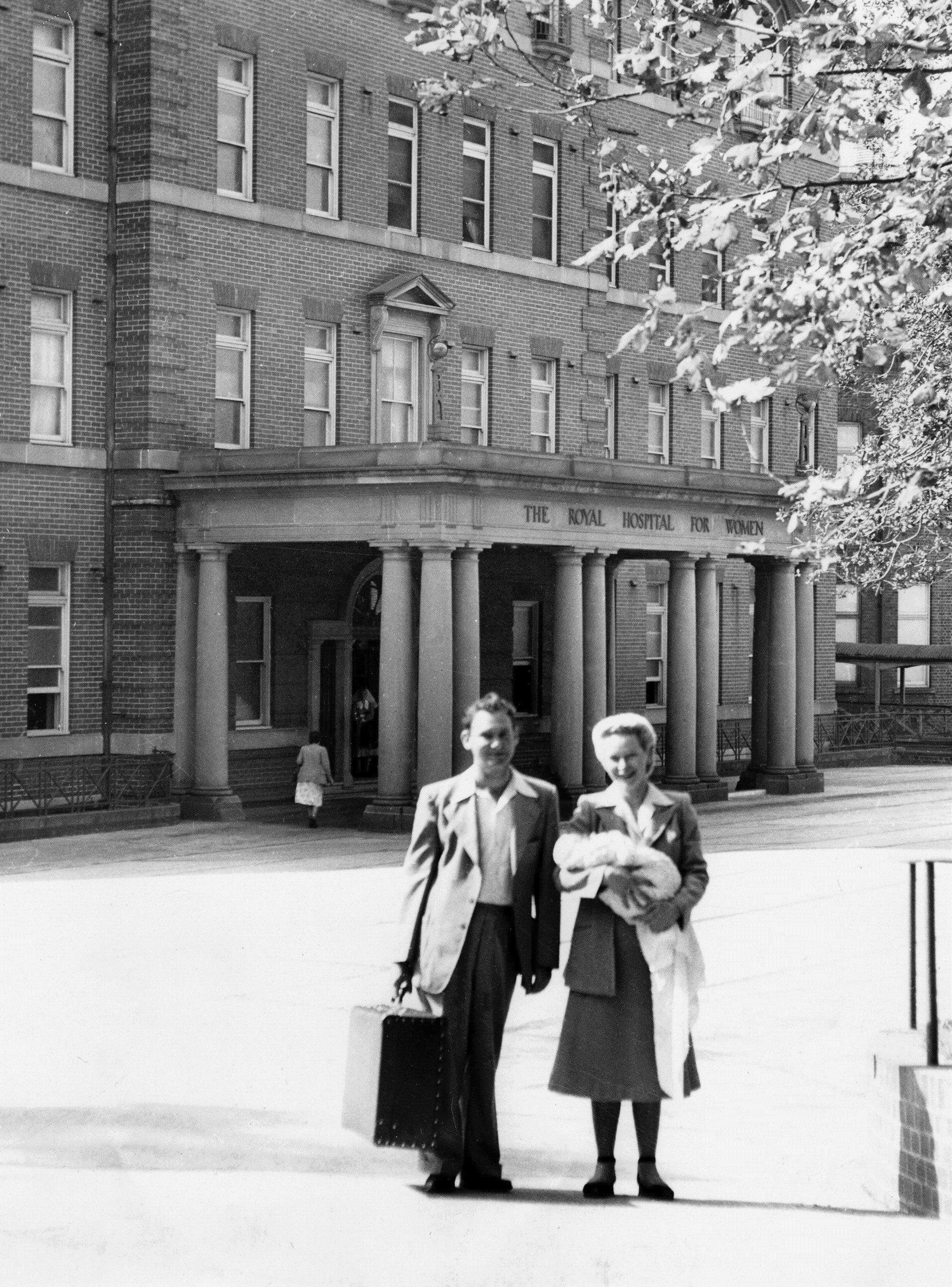 In 1901, The Royal moved to the Paddington site and in the first year there were “219 indoor births, 39 deliveries on district and 54 gynaecological admissions”[6]. The numbers rose steadily each year as the hospital’s reputation grew and became more accessible to women, and by 1907 there were 1319 admissions.[7] In October 1904, the hospital received a Royal Warrant and was to officially become ‘The Royal Hospital for Women’.  The facilities in the new location were vastly superior and when the gynaecological wards and operating theatres were first opened in 1905, the halls were lit with electricity.[8]

It was in the Paddington location that Australia’s first antenatal clinic was opened by Dr. John Cadell Windeyer. Dr. Windeyer hoped to diagnose maternal disease at the earliest possible stage and through his work, developed a method of determining the fetal position, which shaped midwifery and obstetric teachings for 40 years to come. [9] Incredibly, The Royal’s vibrant antenatal clinic is now the longest running antenatal clinic in the world. With the advancement of medical technologies and greater awareness of the importance of care during pregnancy, death during childbirth has greatly diminished, and today The Royal welcomes over 4,200 babies each year.

The Royal Hospital for Women has been pivotal in paving the way for women in the midwifery and medical professions. In 1871, a Florence Nightingale nurse, Elizabeth Elric (nee Blundell) was appointed Matron of the hospital. Mrs. Elric was a formidable Matron who set up many of the hospitals timetables and rules, for patients and nurses alike.[10] On the 1st of July 1905, The Royal employed its first ever female resident surgeon, Dr. Constance D’Arcy. Dr. D’Arcy, who was paid a stipend of 50 pounds while the male surgeons’ annual salaries ranged from 130-200 pounds,[11] was a woman of great renown, and was to become the deputy chancellor of the University of Sydney from 1943-46.[12]  In 1927 it was the third female resident medical officer at Paddington, Dr Margaret Harper, who opened a nursery at The Royal for premature babies. Her passion and dedication saw the hospital’s neonatal death rate halve after the nursery’s opening. The Royal currently houses the largest neonatal intensive care unit in the state, with many critically ill preterm babies transferred to The Royal’s care each year.

The Royal began informal medical training in the early 1870s, with some nurses being taught midwifery under Dr. Renwick. The first courses officially began in 1878, when the hospital became the teaching hospital for training in midwifery for the University of Sydney students. In 1965, the hospital furthered its educational ties, partnering with the University of New South Wales. With both relationships standing strong today, The Royal remains an educational hub, recognised both nationally and internationally for excellence in women’s health care and cutting edge research. Given this, and with 150 years of innovative practice at The Royal, it is no surprise that the hospital holds multiple titles of medical ‘firsts’ in Australia, as well as several world firsts.

To name a few, The Royal opened Australia’s first baby health centre in 1906; one of the first, and now the longest running antenatal clinics in the world in 1912 and the first Australian male and female sterility clinic in 1943. The first gynaecological cancer detection clinic was opened in 1949 and later, in 1986 the first comprehensive gynaecological oncology unit was established. In 1978 the first menopause clinic in Australia was opened at The Royal. The world’s first cardiac ultrasound of a baby in-utero was performed in 1970, which was followed by the world’s first cranial ultrasound of a baby in-utero in 1974. Incredibly, in 1985 the first operation to save a baby’s life while in-utero was performed at the hospital.

The sterility clinic, opened in 1943, marks the beginning of The Royal’s research into fertility. Around this time, and in the decades to follow, both access to and societal attitudes toward, contraception began changing and as a consequence there was a greater demand for assisting couples wanting to conceive, with less babies up for adoption.[1] The clinic, to become the ‘Department of Fertility and Reproductive Endocrinology’ in 1983, began offering In vitro fertilisation (IVF) and other fertility measures from 1988. The Royal has maintained its focus on fertility research and assistance, with the new Fertility Research Centre (FRC), Australia’s first holistic public IVF clinic, opening at The Royal in 2017.

In 1997, The Royal Hospital for Women moved to its current location, in Randwick, where it still thrives. Since moving to Randwick, MotherSafe was established in 2000 and is based at The Royal. This is a NSW statewide service offering free counselling over the telephone and face-to-face for women concerned about exposure to medications whilst pregnant or breastfeeding.  In 2006, another first for women occurred with the establishment of the Malabar Midwives, which is run by The Royal. This service offers Aboriginal and Torres Strait Island women and women with an Aboriginal partner or Torres Strait Islander partner, more culturally specific support and one to one midwifery care during pregnancy and after birth. In 2013 The Royal achieved another first with the publication of the M@NGO trial, the world’s first randomised controlled trial of midwifery group practice care for women irrespective of their risk factors. Today The Royal continues to offer the largest caseload Midwifery Group Practice in a public hospital in the world.

The Royal Hospital for Women cares for more than 10,000 women each year. To date The Royal has witnessed and been the birthplace of over 350, 000 babies. The hospital continues to set global standards for health care excellence, and throughout the years, The Royal has continued to build upon, and further develop the ground-breaking service its ancestors began 150 years ago. This significant moment marks over 150 years of rich history; of experience, innovative research and 150 years of being undeniably dedicated to women.